It's often said that, "you can't judge a book by it's cover". It's often true (I guess that's why they say it!?!), especially in the case of an accident. There's what you can see, and then there are the things that lurk under the surface.

Dale, at MMS Aviation, is leading the charge on take a look "under the hood" of our aircraft- into every corner to find each and every indication of a "discrepancy"- something out of the ordinary. Much of the noticeable damage was "impact" damage- however, in the final moments of our emergency landing, we made impact with a telephone pole and were violently spun ninety degrees to a stop from about 25 mph. The force of that spin and abrupt stop caused forces to travel throughout the aircraft, leading to much of the hidden damage.

Dale is finding some interesting things- even things that weren't associated with our accident and that were not repaired during last years refurbishment. So, MMS will have none of that! They'll be fixing it all. Here's Dale's latest update (23 FEB 2011): 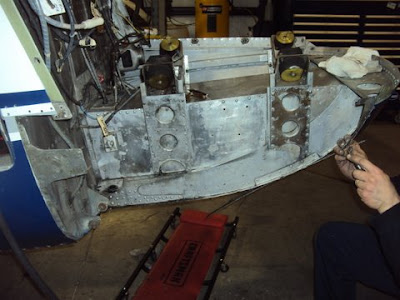 "I have almost finished the hidden damage inspection except for the rudder pedal area, where I know that there are some broken pieces from the accident, but haven't seen in there yet. there is also some nose damage from a previous accident, so we will have to repair that too, it involves pulling a belly skin forward of the doors to gain access, and replacement of some pieces in there. The engine and propeller are off, and the first skins have been removed. The nose gear is also out and I was pleased that it came out quite easily." 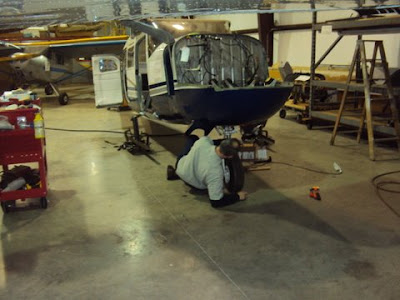 We're blessed to have such thorough and professional work on our aircraft. The team at MMS are pros- N207FD is in great hands! Keep up the great work guys!