As you may know, our one and only aircraft has been sitting in one of the hangars belonging to MMS Aviation in Coshocton, Ohio for a few months, waiting until their workload eased and would allow for repairs to begin.

Actually, I should say that, even though THEY couldn't start the work, they delivered the right wing to a wing repair shop in Indiana to have repaired. Here's the photo of how it was delivered back and forth. Th 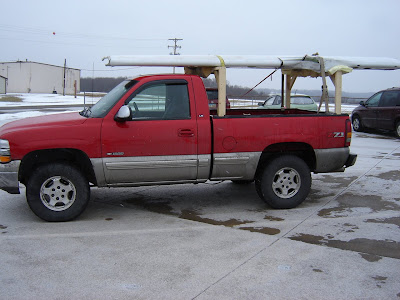 e mechanic making the wing delivery, Paul, was one of the three mechanics that were here, in Gabon, in August to put the wing into the shipping container for delivery to the US. He produced a video regarding his work to deliver the wing and his ministry. See the video HERE.

Today we just received the news that the work is starting, full-tilt, in the hangars of MMS Aviation! Here are the words of Dale C., project leader:
"Today, I am getting the aircraft into position so that we can start work. We are pulling the engine so that we can inspect the engine mounts, and do the repair in the tunnel area.
The fuel pump is going in for overhaul. I have the aileron and flap back, and the wing is also complete. I have a team put together for the gear work and that starts next week."

Please keep Paul and the other technicians in your prayers as they seek to do all the work effectively and in a timely manner.
Posted by Steve at 3:51 PM