FG:  When did you decide to work in Aviation?
SS:  The aviation "bug" bit me as a teenager during a flight in a '48 Taylorcraft taildragger, piloted by my older brother.  Early, on a clear, crisp fall morning in Pennsylvania, before I had to be at school, we lifted off a grass strip and toured the skies above Happy Valley (State College).  I was hooked!  It was like the world below had come to a complete standstill to make way for this surreal experience.

FG: Where were you trained and educated?  What degrees or ratings do you hold?

SS: I have a B.S. in Aviation Technology from LeTourneau University (Longview, TX).  There, I received my Airframe and Powerplant maintenance certificate, as well as my flight training as a Commercial, Instrument single engine and flight instructor ratings.  Later, I completed multi-engine training.

FG: What was your first aviation job? What jobs did you have after that?
SS: I was free-lancing as a…


...flight instructor after college.  Then, there was a job opening with one of the companies whose airplanes I used to wash.  I could hardly believe that I was a bonafide, salaried pilot of a Cessna 172, patrolling pipelines and power lines from Texas to Ohio on a weekly route.  I enjoyed pipeline flying for many years, building over 8,000 hours, covering routes from Wichita Falls all the way to Bangor, Maine.

FG: What is your job title now and what are you duties?

SS: For the last 5 years, I have been a bush pilot in central Africa for Air Calvary, starting an aviation service for a remote jungle hospital with a hard-working Cessna 207.  I'm the only staff, so on any given day I do anything from fly the airplane to reservations to maintenance with a whole lot in between.   Another pilot-mechanic arrived, so now I'm "program manager", concentrating on future growth.  I've also worked with the few other general aviation supporters to form "Aviation Générale du Gabon".

FG:  Where is your base of operations?
SS:  Air Calvary is a non-profit with an office in Crowne Point, Indiana. 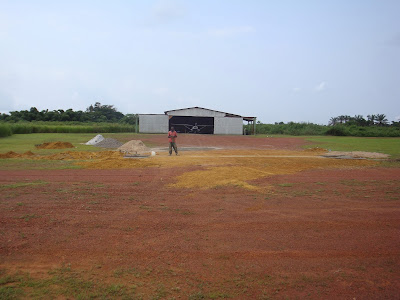 The program in Gabon is the only full-time work that Air Calvary sponsors.  The one-aircraft hangar that is our base is at the Bongolo Hospital's airstrip in the village of Lebamba, Gabon.  We've kept the 2400 foot strip certified as a public airport- one of only 12 in the country the size of Colorado.

FG:  How is your work funded?
SS:  Air Calvary is supported by generous donations of private individuals and organizations, mainly from the US.  We exist to serve critical transportation needs to underserved people as an expression of God's love.  We fly in mainly in Gabon, but have also flown in Cameroon and are investigating expansion into Republic of Congo (Congo-Brazzaville).
Posted by Steve at 3:06 PM