Monday, I got a call from a woman whose husband was very ill at Bongolo Hospital.  He would need to be put on dialysis quickly- a service that Bongolo does not offer.  So, they were looking to get him to the capital city, Libreville, where he could receive that care.  They asked me how much it would cost to air evac their loved one out.

I cringed at the question because I know that the average Gabonese person can't afford the $1500 in operational costs that it takes to get our Cessna 207 to and from Libreville.  So, I deflected the question a bit, by saying "Ca depend"- it depends.  Which is, indeed, true. 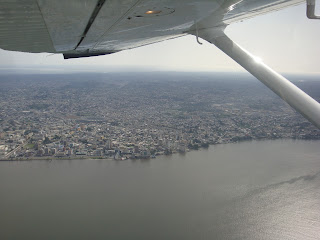 We have built up a small account called "emergency air evac", but it was really to be used in certain situations- namely for families that truly can't afford the service.  So, a bit of quick investigation was in order.  After a couple of phone calls to personnel at the hospital, I concluded that this family was a family of means and would gladly be able to cover the operating costs.  So, we had stumbled upon one of the 5% to 10% of the Gabonese population that could make the contribution!  I explained the costs involved and the contribution program to the family, they understood, and everything was put in order. 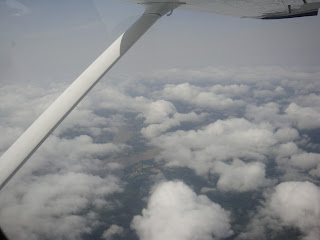 Tuesday morning, after refueling and thorough pre-flight, I was on my way, climbing to 7000 feet for a smooth ride in the calm morning air.  As is always the case in Gabon, there was some mist and fog laying in patches below and, today, there was some scattered cloud cover between 2000 and 5000 feet.  If I wanted to keep the trip back turbulence-free, I might end up having to climb up to 8000 feet- the appropriate altitude for the route that would keep me above the clouds that were sure to be climbing higher as the morning turned to afternoon.  However, climbing to altitude with a weak air evac patient in an unpressurized aircraft can turn fatal.  I began to hope that the bases of the clouds would cooperate for me to stay at a lower altitude for the way home. 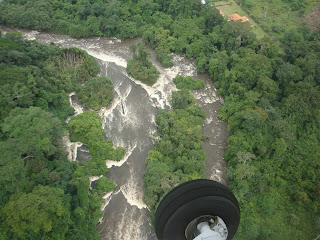 Touching down in Bongolo, I was surprised to find that an additional three people would be coming on the flight- three additional family members.  So, laying the patient down and putting the seats to the side would not be an option.  Rather, the patient was loaded in the chair behind the co-pilots seat and he would lay, sideways, into the lap of his daughter, seated behind him.  In the third row of seats was another daughter and a sister of the patient.  In the co-pilot's seat was a brother.  The man was severely week and seemed to be in and out of consciousness- eyes rolling backward from time to time.  He seemed close to death. 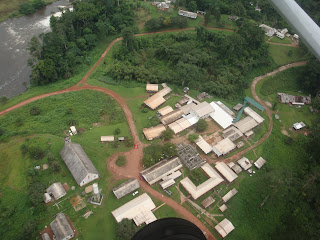 After a passenger briefing (in French) and a prayer shared with about a dozen others who had gathered under the wing of the airplane, we were ready to go.  The on-lookers were moved out of the way, the vehicles cleared from the ramp area, and we started up and taxied into position.  We lifted off about half way down the 830 meter strip and gently turned toward Libreville.  We stayed at 2500 feet initially, and then, to keep terrain and cloud clearance, we later went to 4500.  En-route, I learned interesting things about the patients' brother who was sitting next to me.  Notably, that his eyesight was pretty poor as he pointed at a passing skift of cloud and said that I should look out for the other airplanes.  After initially laughing, I quickly stopped and then thanked him as I realized that he was not joking at all.  Oops. 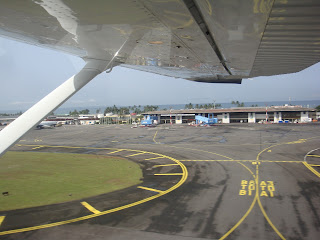 About 40 miles out of Libreville, I maid contact with the Libreville control tower and let him know that we were on an air evac operation.  He gave us priority and, as we neared the airport for landing, he had the arriving Air Ethiopia flight make a turn in holding, so that the way was clear for us.  NICE!

We touched down in Libreville to a waiting family SUV and more family members.  They gently removed the patient and were on their way to the central hospital of Libreville.  There I was, alone with the airplane at the end of another successful air evac.

It is a great feeling of success as our team (this means YOU), works together to bless others in the name of Jesus.  We serve a Heavenly Father that wants to interact, personally, to each person in the world.  His preferred way to act is through YOU and I as His hands and feet.  This med-evac service may be one "hand" that demonstrates the love of God for people, but it is at the end of an arm that makes it all possible.  Together, we are the body of Christ, and in word and deed, we are doing a remarkable thing that points back to the Father.  It's great to be with you in this.
Posted by Steve at 11:31 AM