Fighting To Die For Christ 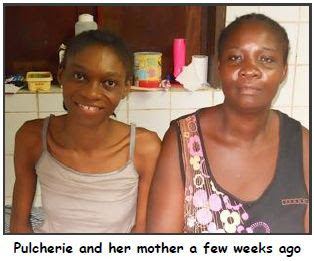 One of our teammates, Dr. David Thompson, shares the following story:


“D on’t let him take me!” the young woman screamed. “Please, stop him! I don’t want to go to the Nganga!” But her father picked her up, carried her to the waiting car and sped away with her.

When 27 year old Pulchérie came to Bongolo Hospital months ago, she was a thin but still beautiful young woman. She complained of abdominal pain, vomiting, and weight loss. She had become a Christian a few years earlier and had grown rapidly in her faith. Then she became ill, and none of the doctors in Libreville could figure out what was wrong.

Pulchérie turned out to have a bowel obstruction caused by a mysterious mass in the area of her pancreas. At surgery, it appeared to be benign, so we biopsied it and bypassed the obstruction to enable her to eat normally. Two months and two operations later it was clear that Pulchérie had widespread, advanced cancer throughout her abdomen.

As the cancer grew she lived with constant pain, despite strong painkillers and the church’s prayer for healing. Her family wanted her to return to Libreville, but Pulchérie knew if she did they would take her to a traditional healer, called an “Nganga.” When she asked if she could remain at the hospital until she died, we agreed and supported her in her fight to be a testimony to her family and live for Christ until her last breath. That is until one after-noon when our entire surgical team was tied up in surgery and her father swooped in. She fought with all her strength, but she was so wasted it took little effort for him to subdue her and carry her off.

Two days later Dr. Dave wrote, “Just to let you know, Karen, Lisa, and a young pastor were able to find Pul-chérie (and despite the anger of the Nganga who was claiming he had already started to heal her) read scripture to her, pray for her, and encourage her. She had lost more weight and the end may not be far away.” They were able to share encouraging Scripture with her.
Posted by Steve at 8:54 AM