The national church in Gabon that we partner with, EACMG, is embarking on the construction of a social works campus on 65 acres of property, just outside of the capital city of Libreville.  There desire is that the various elements of the campus will be a way for them to demonstrate God's love to the country's largest population area.  There will be a hospital, schools, career training, homes for widows and at-risk children, as well as agriculture and fish-pond training.

The church has also asked that our aviation program get involved with assisting with the construction of a runway and then involving nationals in our work, which involves training.  Last year, I was contacted by a friend, Chase, who told me that the Lord had laid this project on his heart- even before I was really promoting it.  So, I contacted Pastor Jacob, my Gabonese friend as well as the national church liaison for international partnerships, to see how it would work.  It turned out that a team from a Pennsylvania church (Grove City Alliance) was coming this spring, in concert with E4 Project, to work at the site.  So, we would coordinate our team to dovetail with their visit, which was more focused on the construction of a bunk house for volunteer teams (national and international), as well as the first medical clinic building.


The vision is for the airstrip to be a complementing piece of the campus- to support transportation logistics that connect the people and resources to come into this campus as well as when they need to go out (ie. medical evacuation to a larger facility).  Engineering Missions International were kind enough to partner with the national church in assisting with the site design.  Two teams of volunteer engineers conducted short term trips to the site to do extensive work on elevations, setting perimeters, soil study, water source investigation, and more.  One of their many documents is here- the general site plan: 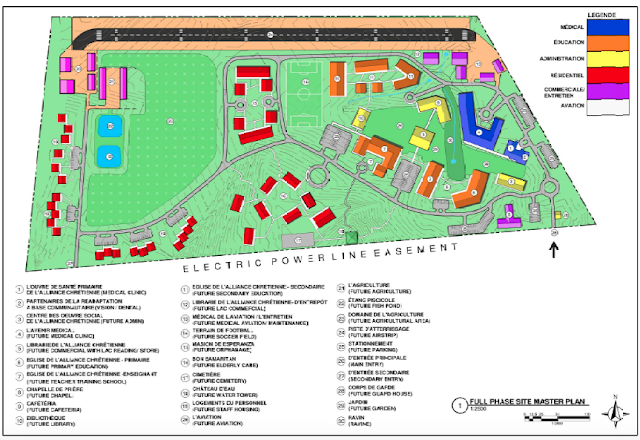 Things were starting to move into place for the first phase of work- the national church was ready to partner up, Grove City Alliance was coming to build the bunk house, Chase and friends were coming to pitch in on the airstrip... Here we go! 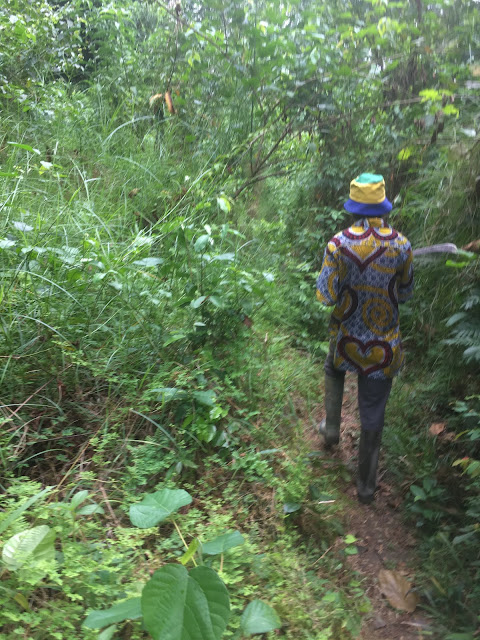 Prior to the team of international volunteers arriving to start work on clearing the property for the airstrip, I set out, with my new friend Mikolo, to check how the perimeter lines, adjacent to the proposed runway site, were being maintained.

As you can see, we were in very thick Jungle!

Six years ago, when the property was purchased, church leaders and their families were given access to the property to have their own garden.  They knew that it would be a project that would happen in phases, over a number of years, so having people coming and going would help prevent squatters as well as bless people with food!  Little did we know whose garden stood in the way of the runway!  Keep reading!

The team arrived to the international airport in Libreville, we spent a Sunday at church and meeting new friends, tried to get over jet lag, then made our way out to the work site first thing Monday morning.

From our guest house to the site would take anywhere from 50 minutes to 2 hours depending on traffic.  You can see why having a bunk house on site is such a big need!


Thank you to all that prayed and donated.  There were no injuries and we accomplished so much.  It was not without logistical challenges and moments of frustration, but over all, we developed many relationships with many old and new friends...


For more info, here is a video overview, taken 6 years ago, when the project was still on the drawing board!  In the video you will actually see some of the initial site planning work that resulted in the plans that we used to set our markers for the land clearing that we were able to accomplish.

PK27 from E4 Project on Vimeo.

Yesterday, July 4th, marks 10 years of FULL TIME INT'L MISSION work for us!  God has been so faithful to bring along our side a strong team of intercessors and funders.  We are blessed! 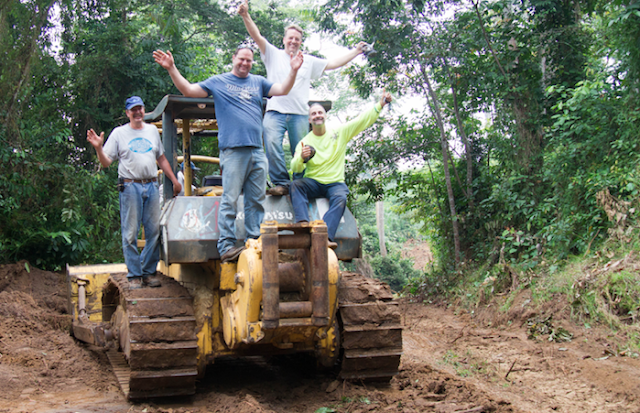 Praise God for the great progress we were able to make in constructing a runway at the PK-27 social ministry campus project in Gabon.  A bulldozer cleared the perimeter line along the rear part of the campus, where the airstrip will be located, then started clearing the jungle from what will be the West side of the runway.  It was slow going and there is still much to be accomplished for an upcoming phase, as the Lord provides.  (More posts to follow on this trip... stay tuned!).
Steve worked with the national church leaders along with 3 short term workers that came from the US.  We praise the Lord for safety and progress toward creating this important link to medical care work near the largest population area of the country.  Please pray for the additional funds that will help the national church to afford 3 additional days of dozer activity to finish the project.  Pray for this work to be accomplished in concert with the opening of the medical clinic.

The medical community of Gabon is currently on strike and the church’s medical facilities are being pushed to their limits, as they continue their work through the strike. 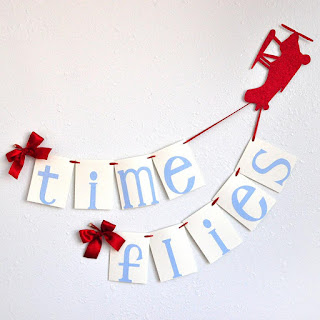 Please pray for Steve and Alace on their current assignment- recruiting and training up new aviation missionaries and their families, then providing care once they are deployed.  Pray for the funding of the church clinic and runway.  Pray for the many people coming to know Jesus as savior through the pastoral training, medical and aviation work in Gabon, Guatemala, Honduras, and Nicaragua through Missionary Air Group.  Pray that the Gabon government would start providing the second phase Turberculosis meds soon so that a resistant strain of TB is not created (see below).
Please pray for Joe, our oldest, as he and his fiancé, Laura, prepare for their 30 September wedding in Chicago!  Pray for Sam’s safety as he is in Colorado working for the summer and doing 2 online college courses.  Pray for Megan as she get’s settled in Chicago.  She has been praying for the right church home.  Pray for us to reach our neighbors for Jesus, even though we travel often.
Thank you for your prayers!  We can’t do this without your teamwork.

Love,
Steve and Alace
* From a Bongolo Doctor…* ”The situation with tuberculosis medicines is very sad. The medicines for the first phase (2 months) of treatment are available in Gabon. However, the medicines for the second phase (last 4 months) are not available in the rest of the country, apart from Bongolo. This is causing most patients to have an interruption in their treatment, which can cause the tuberculosis to become resistant to the normal medications. Resistant TB is difficult and expensive to treat, and a large number of people with resistant TB will be a public health disaster. No one knows when the second phase medicines will be available. Patients who have started their treatment elsewhere are coming here looking for medicine, but we do not have enough for the entire country."
Posted by Steve at 5:46 PM 1 comment: