The answer is "yes"… somedays… many days.  There are losses when you tear up your roots and move an ocean or two away from your loved ones.  You don't even realize the intensity of it until one day you find emotions welling up and, like the Grinch, we find ourselves "leaking".  Sometimes we can conceal the grief; sometimes it comes out in ugly ways… really ugly.  The good news… our grief need not lead us to despair.  Despair is grief devoid of hope (1 Thes. 4:13-18).  In Christ, we have hope as a thread through every emotion. 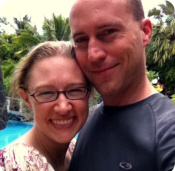 A friend of ours sent along a great article that I have since learned is from a blog that I have linked below.  The article gives great insight to living outside your home culture and the "challenges" that go with it.  The author is Jonathon Trotter, who lives with his family in Cambodia.

by JONATHAN TROTTER on DECEMBER 22, 2013
Living abroad is an amazing adventure, but it comes with some baggage. And sometimes, the baggage fees are hidden, catching you by surprise, costing more than you planned.  You thought you had it all weighed out, you could handle this, squeeze right under the limit.
But then it got heavy.  Your new friends moved away, or your child’s new friend moved away.  Far away.  Like other continents away.   And your kid’s broken heart breaks yours.
Someone died and…


... you didn’t get to say that last, fully present, goodbye.  Family members celebrate a birthday, or the whole family celebrates a holiday, and you’re not there because the Pacific’s really big, and you’re on the wrong side of it.
Or your child can’t remember her cousin’s name, and she doesn’t even know that’s sad.
And you realize there are just some things Skype cannot fix.
And you grieve, and your kids grieve.  Maybe.  But what if all these things happen again? And again.  You have another round of airport goodbyes, another holiday season with sand. Another Christmas with crying.
What if grieving gets old and annoying and time-consuming and exhausting?  What if it becomes easier to just not grieve?  To not let others grieve?
I’ll tell you what happens: Grief itself gets outlawed and a curse descends.  And everyone learns that…


...some emotions are spiritual and some are forbidden.
Has your grief ever been outlawed?  Have you ever felt that your sadness or grief was “wrong and not very spiritual” and you should “be over this by now”?  If so, I am very sorry.  The prohibition of grief is a terrible, terrible curse.
Sometimes it’s outright, “Don’t cry, it’ll all be ok.”  But oftentimes, it’s more subtle (and spiritual) than that.  It’s the good-hearted person who says, “It’s not really goodbye, it’s see you later” or  “You know, all things work together for good.”
What if your kids miss grandma and McDonald’s and green grass, and someone tells them, “It’s for God,” or “It’ll be ok someday; you’ll look back on this as one of the best things that ever happened to you.” What if you tell them that?
Grief gets banned, and what was meant as a balm becomes a bomb, ticking.  The intended salve starts searing.
When loss happens, why must we minimize it?  Why are we so uncomfortable with letting the sadness sit?  Are we afraid of grief?
We sometimes act as if you can’t have grief and faith at the same time.  Sometimes, shutting down grief seems spiritual.  We tell ourselves and others, “Forget the past and press on.  God’s got a plan.  God is sovereign.”  We use Bible verses. 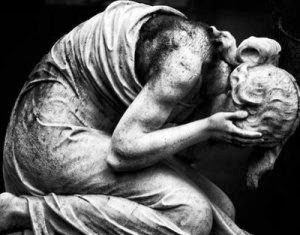 But banning grief is not biblical, and it’s not spiritual.
Maybe we feel that grieving a loss of something or someone shows that we don’t have all our treasures in heaven.  Perhaps we delude ourselves with the twisted notion that if we had all of our treasures in heaven, our treasures would be safe, and we’d never experience loss.  And although this is crazy talk, we speak it to ourselves and others.
Does grieving really signal a lack of faith?  Would the truly faithful person simply know the goodness of God and cast themselves on that goodness?  No one would say it, but we sometimes treat the sovereignty of God as an excuse to outlaw grief.  I mean, how could we question the plan of God by crying?
We may feel that grieving a loss that was caused by someone else (through neglect or abuse) shows a lack of forgiveness.  And although we know it’s not true, we act as if once a person’s truly forgiven an offender, the painful effects and memories disappear forever.
What if the loss was caused by parents or a spouse who decided to become an overseas missionary?  Does the goodness and holiness of their decision negate the grief?  Of course not, but sometimes we feel that the truly spiritual would recognize the godly sacrifice and be grateful.  As if gratefulness and grief are mutually exclusive.  As if a decision has to have 100% positive or 100% negative results.  Gray exists, after all.
Maybe you made the decision to move overseas, and it was a God-thing and your call was sure, but now it’s just really, really hard.  How will you deal with your own grief?  Will it threaten you, or will you courageously allow yourself to feel it?
Remember, grieving isn’t equal to sinning.
Sometimes, outlawed grief goes underground.  It becomes a tectonic plate, storing energy, swaying, resisting movement, and then exploding in unanticipated and unpredictable ways.  A tectonic plate can store a heck of a lot of energy.  Sort of like grief, once outlawed.  It descends below the surface. And sometimes heaving tectonic plates cause destruction far, far away.  Really smart people with even smarter machines have to do smart things to pinpoint the actual location of the destructive shift.
Have you ever experienced an earthquake like this, caused by buried grief?  It might not be obvious at first, but after a little bit of digging, you realize that the pressure and tension had been building for a long, long time.
So please, allow grief in your own heart and in the hearts of your family members.  If you’re uncomfortable with other peoples’ grief (or your own), you might want to look deep, deep down in your own soul and see if there’s some long-outlawed, long-buried grief.  If you find some, begin gently to see it, vent it, feel it.  Begin talking about it, slowly, with a good listener.
And if you come across someone who’s grieving a loss, please remember that they probably don’t need a lecture, or a Bible verse, or a pithy saying.  But they could maybe use a hug.

———————————————————————–
Jonathan Trotter is a missionary in Southeast Asia, serving with the church planting mission Team Expansion.  Before moving to the field with his wife of thirteen years and their four kids, he served as a youth pastor in the Midwest for ten years.  In preparing for the field, Jonathan worked as an ER nurse in an urban hospital, where he regularly witnessed trauma, suffering, and death.  His little sister died when he was six, his mother died of breast cancer when he was seventeen, and his father died of brain cancer when he was twenty-five.
For more thoughts on grief (although not specific to missions or third culture kids), check out Don’t Be Afraid of Me, Please (and other lessons from the Valley)
Edited and adapted from Outlawed Grief, a Curse Disguised, August 2013.