This past Wednesday, while having some meetings with government ministries, a call came in requesting us to assist with a medical evacuation.  Around 4pm, I was able to launch to the town where a horrible car accident had happened between a van carrying a load of school children and an SUV.  One child had died at the scene.

The four children that I would transport had bad wounds, mainly to their heads.  They were in stable condition and had no need for oxygen or other in-flight care- they simply needed transported from the town (only reached by boat or airplane), 45 minutes back to the capital city where they could get to the doctors and machines that could care for them.  Although our aircraft is mainly working to support the work of the Bongolo Hospital, we still use the aircraft to bless people, no matter where their destination needs to be.  The doctor providing the care for them determined that Libreville was the best for these children, so that's where we headed.  Additionally, for the time being, our aircraft is not outfitted for in-flight care (ambulance), so we must ensure that each patient is stable and able to be transported safely with no chance that they will need special care during the flight. 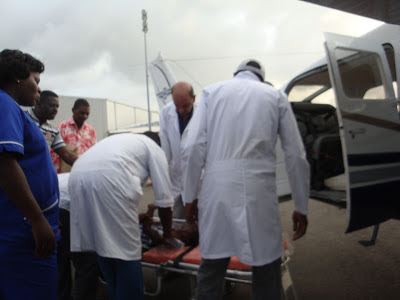