Here are some great stories from the staff at Bongolo Hospital: 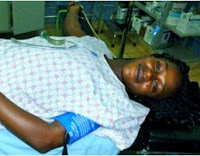 Sidi, a lovely young Gabonese woman from Libreville, came to our hospital in late March complaining of a large, painful abdominal mass in her abdomen.  Doctors in the capital had ordered a CT scan that showed a massive tumor growing out of her left kidney.  Her family could not afford the $ 5,000 fee for the surgery. We agreed to operate on her for $350, hospitalization included.

We were quite concerned about the planned surgery because the tumor was large and appeared to be stuck to several critical structures. Sidi and her mother are believers, and they had such a wonderful confidence in God that it was clearly visible on Sidi’s face as she lay on the operating table prior to surgery. 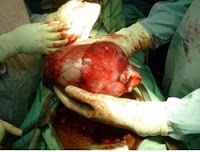 That sense of peace remained, despite my warnings about many possible complications.  God helped us wonderfully, and the surgery went exceptionally well. The tumor came out in one piece and did not appear to be invasive. We are waiting now for the pathology report .

Two days after her operation Sidi was walking around the hospital grounds in her street clothes! A few days later she attended the Bongolo church’s three-hour service. A week after her operation she and her mother traveled to Libreville in a minibus.
Posted by Steve at 1:33 PM