Every time I would see a product from the retailer GAP that proudly displayed their name on it, I would point and say to my kids, "hey- God Answers Prayer!"  A nice reminder that God is actively involved in our lives.  How incredible that the Creator of the Universe cares about each aspect of our lives and wishes to incorporate us into a perfect plan where He is glorified, and we realize our greatest joys.  Hard to imagine, but... try it out and see.

In this vein, I ask that you would spend time communicating with God (intercessing) about the following:


A BIG BIG BIG prayer request that we need intercession on is our request to the Gabonese government that our import of aviation fuel be exonerated from all extra costs and taxes.  The minister of health has already signed off on this and we now need the minister of commerce to sign off prior to heading to the port and verifying that all is in order.  We submitted our request nearly a year ago, so this is really taking an inordinate amount of time.  Without this exoneration, our fuel costs will continue to be sky high and our service will be too costly for us to do anything but squeak by paying our operational costs, and not being able to build a subsidy fund for conducting flights for the most needy.
Thanks for your prayers!!! God is great and greatly to be praised!
Steve
PS. CLICK HERE for more info on how this exoneration and subsequent fuel purchase will impact our work here in central Africa.
Posted by Steve at 12:26 PM No comments:

Here is a great prayer from Thomas Merton for your consideration and, possibly, praying for yourself.  Enjoy!
My Lord God, I have no idea where I am going.
I do not see the road ahead of me.
I cannot know for certain where it will end.
Nor do I really know myself.
And the fact that I think I am following your will
does not mean that I am actually doing so.
But I believe that the desire to please you
does in fact please you.
And I hope I have that desire in all that I am doing.
I hope that I will never do anything
apart from this desire.
And I know that if I do this
you will lead me by the right road,
though I may know nothing about it.
Therefore, I will trust you always
though I may seem to be lost and in the shadow of death.
I will not fear, for you are ever with me.
And you will never leave me to face my perils alone.
Thomas Merton
Posted by Steve at 5:57 PM No comments:

Our home church has sent a "vision" team to Gabon to get their first taste of partnership with the local church in being the hands and feet of God here in central Africa.  One part of the team has a focus on providing some dental care and instruction, the other team's focus is on encouraging and praying with the Gabonese church in regards to their mission efforts in a neighboring country- Equatorial Guinea.  This team includes the lead pastor for our sister church from El Salvador- Pastor Mario!


It is so fun to have our worlds collide as the team is made up of good friends that we have known for many many years, but never spent time with on this side of the ocean.  Hollywood could not write the script that is being written, right before our eyes, by our loving, creator God.  He has knit our lives together so uniquely- we are humbled to play a part of this "big, hairy, audacious" effort to be part of the people of blessing and peace that covenant with Him for the purpose of His Glory.


Because Alace and I are hosting the team and taking care of many logistics, we will hardly have time to reflect upon things during the trip.  However, others in the group are doing a wonderful job at expressing all that the Lord is doing.  Here is a link to one of those links so that you can read stories and see some pictures:


If you're still not convinced, I'll post a portion of that blog here, for you, so that you can get a taste.  Enjoy!

So by now, most who follow this blog will be aware that we have been trying over the last few days to get Pastor Mario’s visa into Equatorial Guinea taken care of, but without much success. Set back after set back hit us—first necessary paperwork, then additional requirements, then processing time. It seemed like it would never get done! Our scheduled departure time (today) was delayed, and we hoped to get his visa today and leave around 5:00am tomorrow (that’s between 5:30 and 5:45 African time). So when we finally received an emailed letter of invitation, we printed it quickly, changed clothes, and rushed to embassy, where we promptly waited for about 2 hours.
Finally, a man who seemed to be in charge came out, shook hands with each of us (including poor Tia, who unknowingly chose to come along for the ride and was now stuck sitting in a hot and sticky African embassy for several hours), and looked at our paperwork. He seemed to be quite impressed. In fact, so much so that he immediately took our letter over to another group of people who were waiting across the room and explained that this was a great example of what they needed to do in order to get a visa into the country! He returned to us, took payment for the visa, spoke with Steve for a few minutes (my broken French got lost somewhere in the middle of that conversation, so I’m not sure exactly what they talked about… I was thinking Steve said something about politics and the man said something about bananas when I realized that I really had no idea what was going on), and then he disappeared behind a curtain in the corner.
We sat down confidently, assuming if our letter had been such a model of excellence and we had received such warm greetings (and even possibly promises of bananas), all was well. However, a few minutes later the man emerged again, and although by this time I had decided trying to understand was a lost cause, I could tell by Steve’s expression the news was not good. It seems that the ambassador himself must approve the visa, and he would not be in until at least 10:00 the next morning. Steve pushed and prodded, literally offering to jog alongside the ambassador during his workout in order for him to sign the documents sooner (seriously, I’m not making that up—he even did motions along with his suggestion!), but all to no avail. We walked out into the pouring rain a bit frustrated and disappointed, knowing that there would be nothing more to do until morning. Delayed again.
Moments later, I posted the news on Facebook via my 3G Kindle, which miraculously has worked in every country in which I’ve ever traveled. Many had been praying, and I figured an update would be good. We discussed the situation on the way back to the house, needing to grab a quick snack (lunch had been missed hours before) and change clothes before we headed out to the Hope House orphanage. As we did, I checked Facebook one more time, and found a message from one of our incredible prayer warriors and intercessors at York Alliance. I’ll summarize her message this way: keep praying that the signature comes through, but if God leaves you in Gabon one more day, it’s on purpose. Better pay attention.
It’s so easy in the midst of trying situations, particularly ones that are so completely out of your control, to forget that God is perfect. Perfectly good. Perfectly sovereign. Perfectly loving. Perfectly able. Perfectly in charge in every possible way. But this grand reminder, in the form of a Facebook comment, brought us back to the true reality: God isn’t playing games with us. He loves us, has a plan for us, and somehow this, too, is part of that plan, otherwise, it wouldn’t have been allowed. Our world isn’t a Wild West showdown between a sheriff and a gunslinger, both with equal odds of pulling it out. We’re not in a Hollywood epic with “good” against “evil” in an evenly matched bout. The Biblical record reminds us again and again that when God shows up on the scene, evil cowers (see Matthew 8:28-34). There is one God, He is in charge, and what He says goes.
Being reminded myself, I read the comment to Mario. He nodded vigorously and just about leapt up with excitement after hearing it: “Vamos!”--Let’s go! If God has something for us, Mario figures, then by golly, let’s get to it.
So we did. We drove out to the Hope House orphanage, where we interacted with the 45 kids that live in that home while Dr. Paul and his team did some more of their magic. Immediately upon arrival, Mario connected with “Christopher.” Christopher speaks decent English because his family is from Nigeria, so they could communicate a bit. And over the next two hours, they played together, laughed together, and talked together. They even colored pictures together. And when it was time to leave, Christopher gave Pastor Mario one of those deep embraces that communicates more than any language can ever manage to say.
We got into the car and began to drive away. I asked Pastor Mario about Christopher. His eyes immediately welled up with tears as he talked about the way that 8-year old boy ministered to him. We talked about Christopher’s story: how he was effectively rescued off the street a few years ago as he clowned with people and begged for food and money. How the leaders of the Hope House found his family and asked to take him in—and how his family gladly sent him. And we talked about how Christopher was experiencing the deep, deep love that Jesus has for him at the Hope House.
“When he hugged me,” Pastor Mario said through tears, “I remembered just how much God loves me.”
That’s worth sticking around for. 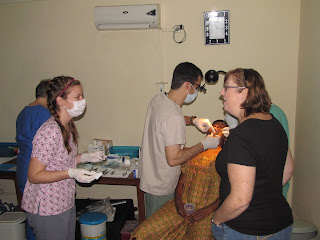 This is our set-up for the mobile dental clinic, with Dr. Paul hard at work. 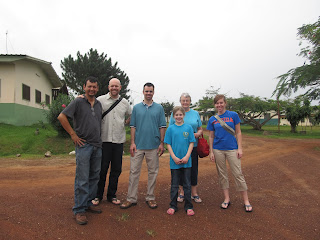 This is our team, minus Dan and Nathan who arrived a day later than the rest of us after a 28 hour layover in Paris. (So don't feel bad for them that they weren't in the picture!)
We just received the letter for Mario's visa, so we're headed to the embassy to see if we can get it! More on that later...

Last fall, Bongolo Hospital had the privilege to receive the first lady of Gabon, Sylvia BONGO, for a visit.  Here is a bit of video from a national tv news station:

Great flights today!  With a freshly washed aircraft with new oil and filter, we were ready for some work!

TO BONGOLO HOSPITAL:  Team of medical workers (3) along with a patient for the eye clinic and her chaperone, luggage, and groceries'


FROM BONGOLO:  Medical worker couple returning to catch connecting flight to the US along with mail, and a mobile dental chair for the LBV city clinic to use with a visiting team from our home church- York Alliance Church (York, PA)!!!


Enjoy the pictures and the video.

A couple new photos to show the progress of the work at the Bongolo Hospital airport (aka. Thompson International Airport).  Enjoy! 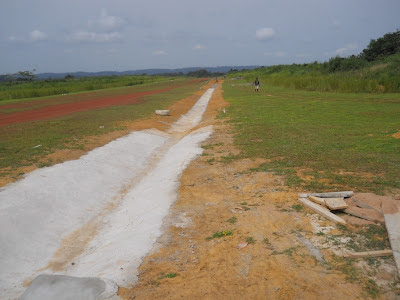 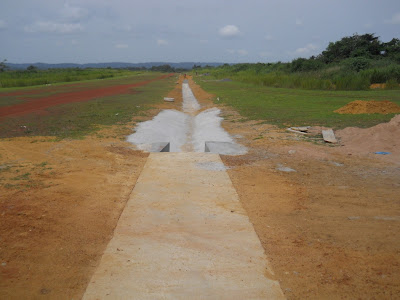 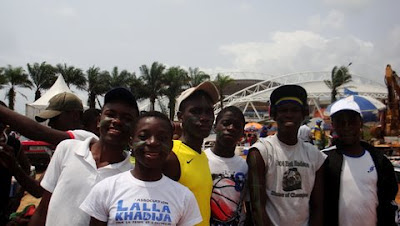 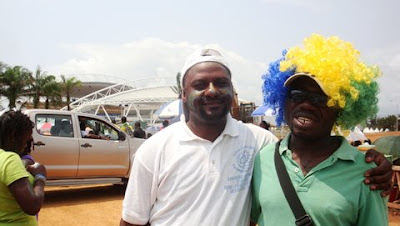 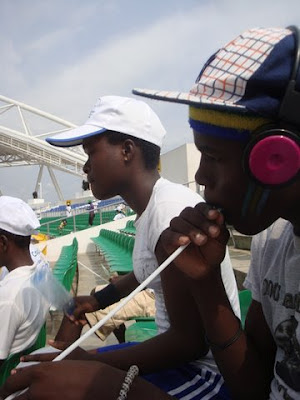