"Getting UP to business"
This past Monday really marked the beginning of "normal" shuttles to the hospital. We departed Libreville for Bongolo with 4 passengers- a daughter of one of the missions' workers and her husband, along with an eye clinic patient and her chaperon. It was smooth sailing- we cruised above a scattered layer at 5500 feet with an overcast layer higher above. That helped to keep things cooler. We descended with no problems, swung a little wider out on base leg to over-fly the hospital for passengers to see and snap photos, and then it was the turn to final and safely down on the airstrip. We actually had some relatives on the side of the runway jumping and waving as we landed. Good times.

After landing, I stuck around the airport for a couple of hours with Tim K., a missionary who helps me a lot, and our two airport workers, Nicolas and Brice. They will be helping us at the airport on the days that the shuttle arrives. Together, we cleaned up in and around the hangar and then we shifted the old, wrecked airplane (Zenith CH801) into the corner. This gave us just enough space to move the Cessna 207 inside. We have about 2 feet to spare on either side of the wing and about 5 to 6 feet of free space in front and behind the airplane. The hangar is a perfect fit! This is the first time we've had the airplane in the hangar there- it felt better leaving it secured in there and it looks great too!

I also spent some time chatting with Nicolas and Brice about what I expect of them- an orientation of sorts. I told them that our objective at the airport is to work together to be a blessing to those that are coming and going. We want to lift up the name of JESUS! The missionary, Tim K., has been a great support for me. Tim's family always has their home open for my overnights and are giving me rides to/from the airport even though it seems their car is about to fall apart. Great folks.

Tuesday, we did some more work at the airstrip hangar in the morning. The main project was fighting the battle against the hundreds of wasps that had taken up residence there. We made a quick stop by a Lebanese-owned store on a corner in the town, bought some flying insect killer, and then it was on to the battle. There were three of us holding cans and Tim K. was playing supervisor and never moved far from the hangar door area. Our plan was simply this- spray a nest and RUN!!! That went on for about 1/2 an hour and most were gone. During that time, Tim would occasionally yell our one of our names excitedly or sneak up behind us and pinch the back of an arm or leg. NOT FUNNY! This led to
more running and a yelp or two. More good 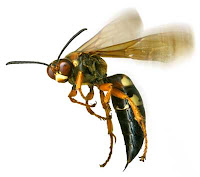 times. The only wasps that remain are high up in the rafters, and I'm fine with that.
After that project and one or two more, we went back to Tim's for a shower and a quick lunch prior to the flight home. We took off just past 2pm with 3 hospital workers that were headed to Libreville for an HIV/AIDS conference where they have been asked to make a presentation. Our flight took us right between two nice thunderstorm cells (complete with lightening), but it was very smooth and we were making great time, until...
Eighty miles out from Libreville I contacted the approach controllers. Up until then, I had been making regular announcements on a frequency set aside for pilot to pilot communications and on the frequencies of a couple of the airports that I passed. On those frequencies, there had been no responses from airport personnel or other pilots operating close to us. I heard a couple other pilots check in- both were helicopter pilots operating out near the coast... oil company operations, for sure. So, with the Libreville controllers and the other frequencies, I check in with the following information: Aircraft Registration / Aircraft Type / Airport of departure / Time of departure / Current location / Altitude / Destination Airport / Estimated time of Arrival / # of passengers / # of crew / Fuel remaining (time to burn what's left in your tanks). So, it's alot of info. Libreville controllers also want to know who the operator of the airplane is so they know who to charge for the services. So, we tell them "Aviation Medicale de Bongolo". Typically, I owe about $5 per flight for the services of the controllers. Not too bad.

Oh yeah... "until"... Yes- we were making record time on our flight until we got about 10 miles out when we were cleared to a point about 6 miles from the airport, but told that I should be expecting to "hold" at that point. Sure enough, upon an

nouncing my arrival at that point, I was told to go into a holding pattern and that that airport was currently "closed". So, because a governmental VIP was either coming or going from the airport, we spend the next 10 minutes making some wide circles over the south east corner of the city before being cleared to land. Up until the point of the "hold", we were on schedule for a total flight time of about 1 hour and 36 minutes! The fastest time prior was 1 hour and 42 minutes. So... oh well... maybe next time.

Next flights are next Monday and Tuesday. Monday- down to the hospital with 5 passengers; Tuesday- flying back to LBV with only 2 passengers at this time. We really would like to see at least 4 in the airplane each flight. We've got flights lining up through April, so things are moving! Our next deal will be to start thinking about growing out team. Office help followed by another pilot/mechanic within a year or two, if things continue on course.
We are growing a charity fund to pay for life-saving air evacuations. I hope that it grows fast- we have some donors interested and am waiting for responses. The flights so far have been great- getting people and things to and from the hospital. The flights are making a big difference, but I think the air evacuations will bring a whole new level of satisfaction as we have this as the heart of the effort here.
Posted by Steve at 11:33 AM