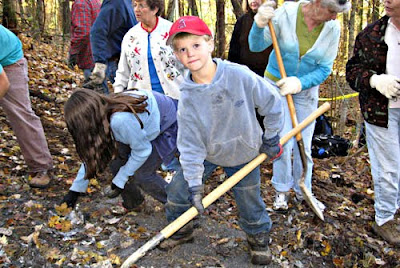 More on Ron Royce's passing from the Johnson City Press

A labor of love - Family, friends of pilot go to forest to clean up, restore crash site

By Contributed to the

ROAN MOUNTAIN — Just a few days after a plane crash in the Tiger Creek community took the life of Ron Royce, 70, and his student Adam West, 38, Royce’s family and friends returned to the site of the crash for a brief memorial service and a labor of love in cleaning and restoring the damaged section of forest where the plane went down.

The memorial service was held on Sunday. After a reading from the Bible and the singing of a hymn, Royce’s grandchildren planted tulip bulbs around the perimeter of the wreckage.

The friends came equipped with trucks, four-wheelers, trailers and other equipment to clean the debris. After this labor of love, the area was once again restored to a beautiful forest.

Bill Peterson was one of the friends of the family who gathered at the crash site. He shared his thoughts on the event:

“Amid the sadness was the feeling of God’s presence as a few friends and family hiked the muddy trail to the site of Ron and Adam’s tragic accident. The private service concluded as the family planted tulips to remind us of the promise of life after death. Our voices echoed through the mountains, as we sang hymns of praise and in thanksgiving to God for the lives of these men. Ron and Adam were flying a mission that was one of Ron’s greatest pleasures. He was training another pilot for missionary aviation.”

Another friend, Ted Rich, said it was a Sunday he will never forget:

“Sunday I heard and saw the story being told to us and to his family that the end of Ron’s life on this earth does not mean the end of Ron’s legacy. Hundreds of students that have been trained by Ron are now training others and passing on not only the flight techniques that he taught, but also the vision he had to reach others with the story of Christ’s love. I also saw the effect that Ron had on his children and their mates and the resulting sense of God’s presence in Ron’s grandchildren. For having the privilege to witness God working out his plan in the Royce family I am truly thankful and give God the glory.”

The celebration of Royce’s life and career will continue Thursday when the family will receive friends from 11 a.m. until 1 p.m. at the Elizabethton Municipal Airport, which is the former Moody Aviation Building where Royce worked for 41 years in many capacities, including flight instructor, chief pilot, principal ground school instructor and manager of flight training.

The family also will receive friends at Grace Baptist Church, 1114 Broad St. Ext., from 5-7 p.m., followed by a celebration of life service beginning at 7 p.m. under the direction of the Rev. Tom Oyler.