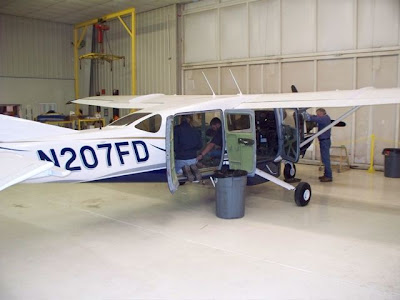 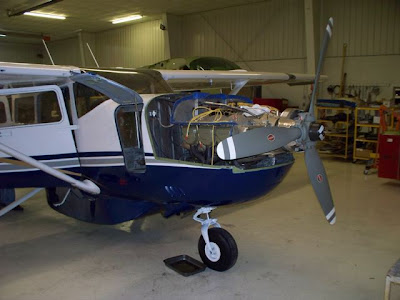 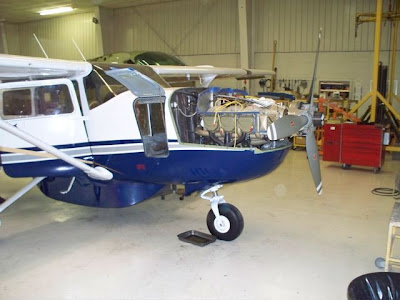 The family and I are having a relaxing Sunday after our worst week in Africa yet- no joke. I hesitate to ever use superlatives or to label things as "good" or "bad"... however... in my "humanness", that's just how it felt this past week. Health issues, computer issues, car troubles, electricity stuff, and more. Of main concern is Joey- he has been dealing with a dramatic reaction to eating a mango. We're told mango's bring out the worst in those that are allergic to them, and Joey is certainly feeling it.

Today's issue is that I could'nt seem to get the 3 photos (above) to upload to this blog from my son's MacBook. They show some of the most recent work being done to the aircraft- the new Teledyne-Continental IO-550, 300 horse power engine that's installed with the new 3-bladed Hartzell prop. The folks at ASIC in Oklahoma are doing a great job.

Added to the "challenges" of the past week, was receiving two emails with "not-so-great" news regarding the aircraft.

The first was from the pilot that we had hired to fly the aircraft to PA for Saturday's commissioning ceremony. He had to cancel due to a dilemma in his schedule. This led to sending out many emails trying to locate a pilot. However, a day later, we received the 2nd email from our colleague, Frank, who had flown in to OK from CA to give us an update on how things were going.

Frank said that we could stop our search for a pilot because, even if we found one, our airplane is most likely not going to be ready to fly in time for Saturdays' event. This was the straw that broke the camels' back for me. This, on top of all that was happening was very difficult to swallow. After all that we had down to insure that our event would work and the aircraft would be ready, things popped up- more so than we had already given room for.

I reached out to our home church for some perspective and my good friend, pastor Brian, saved me from sinking any further into my dissappointment. He reminded me that our commissioning was more about launching this effort and its' impact on the lives of people through a time of prayer and, although having the aircraft there would be nice, it wasn't necessary to reach the objective. So... this helped. I had tunnel vision on the airplane (you can tell from reading this blog!) and had started to forget the bigger picture. Thanks Brian!

I have much to update this blog about. Here are some blogs that I'm putting together:

> HOPE HOUSE orphanage- we assisted the children in finding a new house to live in for this school year.

> NATIONAL CHURCH SYNOD- I had the privelege of addressing all the pastors and delegates from all the C&MA churches of Gabon. I gave them an overview of our program and asked that they join me in praying for maximum impact.

> HOMESCHOOL- Homeschool has begun slowly. We love our program (Swithched on Schoolhouse), but it's not compatable with MAC's. We had to do some fancy footwork to get it going. It's still not 100%, but the kids have started. Also on their schedule: modern dance (Megan), soccer (boys), cooking class (all), swimming (all), guitar lessons (Joe & Megan), harmonica (Sam), and continued hanging out with the Hope House kids.

> GUEST HOUSE- Alace continues to do a fabulous job directing our 5 bedroom, 9 bed guest house. We are also constantly doing maintenance and dreaming up upgrades. We've just got the go-ahead to add a game room under our terrace. It's just dirt under there right now, so this will be a better use of space.

So... we'll get some photos posted of all that and more as we are able.

I (Steve) look forward to seeing many of you in less than a week!
Posted by Steve at 4:35 PM