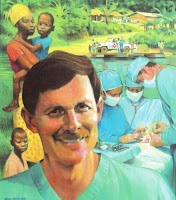 I'm so grateful to have a supportive team, here in Gabon. Even though our aviation program (Air Calvary- known in Gabon as "Aviation Medicale de Bongolo) technically has just one "employee" (me), there are many more on our team. Doctor David Thompson, founder of Bongolo Hospital and resident of Gabon since 1977, took some time recently to spell out the value and importance of our aviation efforts:
"This afternoon as I was getting something out of my refrigerator I saw a magnetic sign that I had placed there sometime ago. It had AMB's logo and the words, "The AMB Support Team." AMB, of course, stands for "Aviation Medical de Bongolo," and the thought that suddenly came to my mind left me humbled: the AMB Support Team is here to serve me.
I realize that AMB is here for more than just me, but the reality is that Steve and Alace Straw and the thousand or more people who stand behind them are here to help us accomplish the mission God has given to our [Bongolo Hospital] medi

cal team, which is to care for the sick and the broken with the love of Jesus, and do everything in our power to introduce them to Jesus. God has expanded that vision exponentially through our educational and discipleship programs and all of the hospital's services.
I was further humbled by the thought that this support team has remained steadfastly in place and has continued to serve our team in every way possible, despite losing its principal ministry tool nearly 11 months ago to a freak accident. Most of you know that their Cessna 207, which cost $325,000 and which Steve and Alace labored for two years to purchase, is still undergoing repairs at an aviation shop in Ohio. What most of you may not know is that during the recent repairs a major flaw was discovered in one of the craft's aging fuel tanks that if undiscovered, would likely have caused another failure.
Other than because of our love and appreciation for Steve and Alace, why should we care about the AMB program and its future success? Here is a short list:
- It has the potential to extend the reach of the Church and it's growing holistic ministries to every corner of the country, through mobile medical teams, evangelistic teams, educational teams, and almost any other kind of team you can think of;
- It can expedite the speedy transport (in less than 2 hours) between Libreville and Lebamba of medicines, fragile medical equipment, volunteer medical specialists and work teams that don't have a lot of time to serve, missionaries, and our national colleagues;
- It can save up to 2 days of travel time on most round trips out of Gabon;
- It can allow passengers to make a round trip in a single day for a particular mission;
- It can flex it's arrival and departure times to meet the needs of the hospital;
- In times of crisis it can evacuate people to the capital, for whatever reason;
- It is a powerful expression to the nation and to the government of what is possible with God;
- It can provide mobile medical education to health workers in remote areas of the country, such as the national parks;
- It provides a model to young people in Gabon who are interested in aviation to see it as more than a commercial tool;
- It can enlist Christian aviation enthusiasts from around the world;
- Through "Operation Runway Rehab" it can support remote local churches and bless the communities they serve;
- It will save wear and tear on our increasingly expensive vehicles and bodies;
- It will be the only aviation program in the country that meets and exceeds the standards of the FAA;
- Because of it's speed and convenience, it can save a life, eliminate police controls, protect sensitive equipment, deliver groceries, deliver vehicle and equipment parts within hours, and save money.
- It glorifies God.
We all know how expensive it is for AMB to operate. We also know that reestablishing the service after the Cessna 207 is repaired and flown to Gabon will be long and logistically challenging. Most importantly, we know that God has called Steve and Alace and their entire support team to provide us with this service. Is it too big a stretch for us to believe that God can solve the problems facing AMB to make it fly affordably in support of our team and the Church for the glory of God, both literally and figuratively?
Thirty-five years ago some of arrived in Bongolo with a vision and a mission to establish Christ-centered health care for the Ngoounié et the Nyanga provinces of Gabon. During the first decade we were here, a significant number of our missionary colleagues told us that the obstacles were so great and we were so feeble our mission could not possibly succeed. We should bail out as soon as we could gracefully do so. Yet because God was with us, the project that God called us to succeeded beyond any of our expectations. Had we taken the heavy and repeated setbacks and reverses we encountered as proof that God had not called us to this mission, the Bongolo Hospital and all of its many services today would be little more than an embarrassing footnote in the history of the [Christian & Missionary] Alliance. Praise God that there were those who encouraged us to continue!
The AMB Support Team is a gift to us from our Father. Please take every opportunity to pray for and to work for it's success, and please continue to encourage Steve and Alace as they persevere in the mission that God has called them to do.
Gratefully, Dave"
Posted by Steve at 11:40 AM