How to move something very big

A:  Use many, many people and a lot of heavy equipment!

A friend of a friend helped to move the ASIANA Boeing 777 from the end of the runway at San Francisco International airport to the ramp.  He sent along some photos.  Enjoy!


"Wednesday night I was sent to a job at San Francisco Airport which I will probably never have to do again. Our company was tasked with moving one of the largest airplanes in the world across the airport without it breaking apart while crossing the other runways." 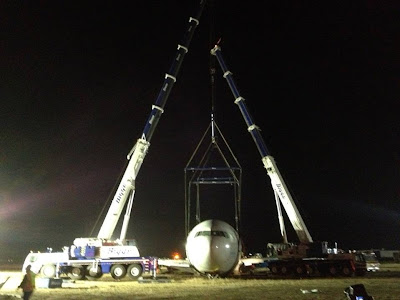 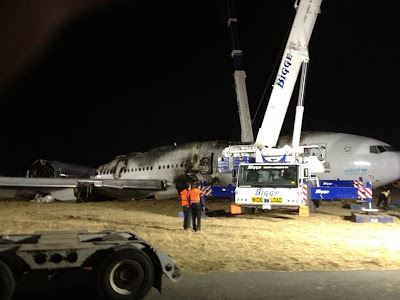 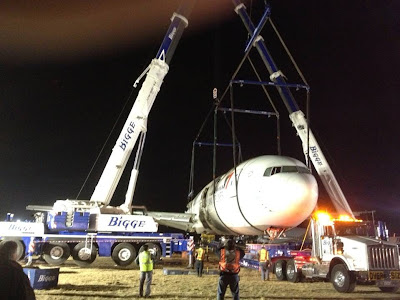 Here is an update from chief pilot/chief mechanic, Rob!  Doing an outstanding job in Gabon!

Thank you for your prayers! We have seen the Lord's strengthening, provision and protection through a very busy and, at times, challenging six weeks.

Our first several weeks in Bongolo were very full as I worked with Steve to move the aviation office as well as the parts, equipment and tools from Libreville to Bongolo. During this time, we encountered unexpected hurdles involving aircraft maintenance, completing an arduous 100-hour inspection and receiving overflight permits to travel between Yaoundé, Cameroon and Bongolo, Gabon. It was marvelous to see God use the unprecedented Air Calvary-Wycliffe partnership to overcome these obstacles for His kingdom purposes!

After four weeks of inspection, working 6 days per week, the airplane was finally complete but I still did not have an overflight permit to leave in spite of several previous requests. However, the morning we finished the inspection, I went to the Ministry of Defense office and the Lord immediately provided a permit that allowed me to complete the test flight that afternoon and leave for Gabon the following day.

I am so thankful for the Lord's strengthening during this time. It was one of the most intense months of work for me over the span of my time in mission aviation. I am also very thankful for the enormous amount of help from the Wycliffe aviation team in Yaoundé. It would have taken several more months to complete the work without them.

During our time in Yaoundé, Cameroon, Bintou worked on her government employee status and enjoyed the opportunity to work with the "Semeurs Junior" (Junior Sowers) choir. She and a friend wrote a drama for an upcoming evangelistic concert. I had the chance to get an early preview and I am really excited about it! It is their first time to incorporate drama into the concert! The Lord also provided Bintou's long-awaited employee number - the last day we were in Yaoundé! It is events like receiving Bintou’s employee number our last day as well as the overflight permit that remind me that we are on God’s timeline and can rest and trust in Him!

Since returning to Bongolo on July 11th, I have flown nearly 25 hours providing support to the Hofman family, a missionary doctor and family who run the surgical ophthalmology program at Bongolo, and the Pan-African Academy of Christian Surgeons. Praise God; the airplane is doing great! The Air Calvary program, now based in Bongolo, saved the doctors a combined 11 days of traveling!

We are also thankful for the Lord's protection. Several nights ago, Bintou discovered a snake in the house around 11 p.m. It initially escaped us (me - Rob). I searched in vain for several hours throughout the house while praying that I could find it. The Lord answered our prayer and it came back out of hiding and so we finally returned to bed after 2 a.m. Please pray for the Lord's peace for Bintou and me. Most all snakes in Gabon are quite poisonous. http://www.petersonfamily.info/robert/gallery/snake

Praise and Prayer Summary
Praises:
1)   The Lord's strengthening during a detailed and extensive aircraft inspection. Also, His provision of over 75 pounds of aircraft parts to Africa on short notice!
2)   The Lord's provision of the overflight permit to return to Gabon.
3)   The Lord's provision for Bintou's employee number being granted the day before we left Yaoundé and the progress with preparation for the evangelistic concert.
4)   Bintou is enjoying her work at the hospital and is providing much needed help to the minimal doctor staff.
5)   The Lord's protection for us in the house, from the snakes we see, and those we don't.
6)   Internet being restored at Bongolo after a week without it.

Prayer:
1)   That Bintou and I would learn more and more to abide in Him and walk with him in all circumstances.
2)   Bintou’s government paperwork process. Now that she has her number, she can continue the paperwork process for being released to Bongolo Hospital.
3)   Strength and grace for Bintou and the other doctors as the patient-load is heavy.
4)   On-going projects for the aviation program, the hangar and the airplane. We will be returning to Yaoundé in mid-August to install a significant "service kit" on the airplane.