The following is a press release from the C&MA.  You're never too young or too old to "Go M.A.D." ... Make A Difference! 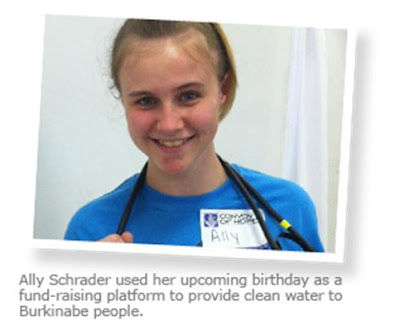 Ally Schrader was on a 30-hour fast at a youth retreat when she learned that malnourished children in Burkina Faso, West Africa, must carry buckets of dirty water long distances. The teen, then 14, who attends Emanuel Alliance Church in Frederick, Maryland, was inspired to raise money to dig a well in Burkina Faso.

Schrader used her upcoming birthday as a fund-raising platform. In lieu of presents, she asked for donations that would go to a well-digging missions agency with which her church partners. Youth pastor Robert Simone says, “Ally has decided she wants to change the world for Christ by providing people with clean water. We call it the Ally Project.”
The lack of clean water is a serious problem in rural Burkina. Many people travel several miles daily to get a bucket or two of potable water. Others drink from stagnant pools—either because their wells have dried up or the rains have caused them to cave in.
Schrader raised $8,000 for one well. Knowing that providing clean water to Burkinabe people opens the door to share Jesus—the Living Water—she continues to promote the Ally Project by making and selling jewelry and other items.


Here is a note from our chief pilot/mechanic, Rob Peterson, after our recent maintenance and upgrades:

I took a couple pictures during the flights recently and wanted to send them to you for an initial report.  The short-and-long of it is that I’m really happy with the investment in the remote oil cooler. Temperature are indeed significantly lower even with new cylinders!  I had to wait for landing traffic leaving Libreville and the temperatures where still fine on takeoff.  I’m not getting about 360 at any phase right now.

The first picture is flying from Yaounde to Libreville with 1.5 – 2 hours on the cylinders. .The second picture was this weekend on the flight to Douala.