We are thrilled to introduce you to Rob and Bintou Peterson- our new teammates!

Rob has been in aviation since birth- literally!  His father worked with JAARS in Indonesia.  He is on loan to our program for the next couple of years.  He and Bintou have been married about 6 months!  Bintou is a doctor from Cameroon (where they met), and will join the staff at Bongolo.

Rob's experience in mission aviation, especially running remote bases, is already blessing us!  More on this in future posts.  For now, Rob and Bintou are busy moving into their new home at the Bongolo mission and, today, we've got him at work, joining me to run a booth at the Bongolo High School career day! 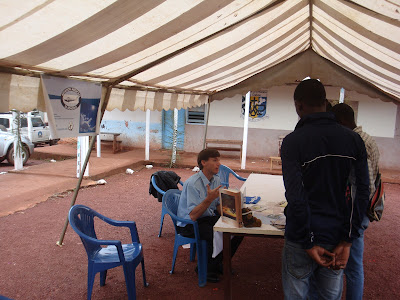 Welcome to the team Rob and Bintou!!!
Posted by Steve at 4:06 PM No comments:

Have a Heart- Support a Heart!

On June 7th, we have another opportunity to transport a patient from Bongolo Hospital that needs specialized care for a heart condition.  You may remember our last opportunity to be involved with our friend, Fidele.

This time around it will be with a little boy, Alain- a patient of our colleague, Deb.  Deb has been identifying candidates, usually one per year, to take part in a program that she developed with friends at the Mayo Clinic (MN) that offers free care to a select few from the developing world.

Deb described this young boy as a bright and full of life!  It's really amazing because, about 2 years ago, he almost died at a hospital in Libreville.  Now, with the help of the team at Bongolo, they have stabilized his condition and his seizures have stopped enough that he can travel.

We'd like to invite you to assist this young boy on his journey.

Here is Deb's description of another case involving a young girl receiving care through the "Heart Send" program that she developed:


We left Libreville, Gabon together on July 9th to fly to Frankfurt, Germany. This was their first time on an international flight and they would need to take a total of 4 flights, the last three without me accompanying them, as I was heading to Atlanta for my 3-month home assignment. The Lord smoothed the way before them in answer to many prayers and they arrived in Minneapolis, MN very tired but happy.

When Grace arrived at the Mayo Clinic, she underwent a thorough evaluation. Her congenital heart anomaly was found not to be as complicated as feared. This made the surgery and recovery less difficult. She had her surgery on July 15th and came through with flying colors. Her mom, Prisque, was strong and trusting the Lord but refused to eat or drink anything that day until she knew that Grace was out of danger.

Grace’s recovery has gone very well and they had a wonderful time in Minnesota. A follow up visit with the cardiologist showed that the repair was a complete success and they flew back to Gabon on August 28th.
Thank you so much for praying for them and for giving to the Bongolo Heart Send Project approved special and partnering with us to make this miracle a reality!!! You have had a huge impact on this precious girl’s life.

We need your partnership to make these flights happen.  To continue offering these types of medical evacuations free of charge, please consider making a contribution to the Gabon Airplane fund.  CLICK HERE to get to the donation page.

You may enter "Gabon Airplane" to support the transport of such cases.  You may also enter "Bongolo Heart Send".

Thanks for your partnership in health and hope in this part of the world.

Steve
Posted by Steve at 6:54 PM No comments:

Kid on my Wall

Two years ago, when my Gabon colleagues and I were at our annual Forum gathering, one of them was giving her update regarding her very critical compassion work at Bongolo Hospital.  To make it hit home, she passed out pictures of people that represented some of those she had opportunity to connect with.

My picture was of Ismael.  Here's what she wrote on the back of the picture:


"Ismael.  2 Year old; HIV +; not yet on treatment.  His mother recently died, an his family members came to take his older siblings, leaving him with a neighbor.  The neighbor brought him for medical care, but upon learning of diagnosis, abandoned him."

So, I took Ismael home and put him on my wall.  Occasionally, I would look at Ismael and pray for him, wondering if he is being cared for.  Is someone going to ever look after him?  Is he still living?

I also take time to pray for my colleagues at Bongolo.  I honestly don't know how they do it.  The pain, the suffering, the death.  There are great stories too, but... I think it'd be so hard not to be overwhelmed by the sad ones.

Actually, I do know how they do it.  It's supernatural.  It honestly is.  The Bible says clearly that, when we serve the least of these, we are serving Him.  Could you imagine anyone more "least" thank Ismael?

In God's Word, it also says that we are a demonstration of Jesus to our world.  When we yield ourselves to a supernatural invasion of the Holy Spirit, we become more Christlike and can have resurrection power to take our "ordinary" and make it "extraordinary".  People notice.  They're drawn to it.

Today, almost two years after putting Ismael on my wall, I get this email from my colleague, Renee:


"Steve, I’m not sure you’ll remember now, but 2 years ago at Field Forum, I gave you a picture of a little boy named Ismael who has HIV. His mother had died and his family didn’t want him. When the neighbor taking care of him learned his diagnosis, she left him with his dad, who she said was not capable and he never came back. I thought that he would probably be dead in a matter of months. He finally came back! He is doing relatively well and his dad seems committed to getting him treatment. He has started medicines, and I am very happy.  I think God heard and answered prayers for him.   Renee"

So very cool.  Lord thank you! Ismael is our comeback kid!

What's on your wall?  Your fridge?  What are you praying for?  What are your God-size dreams and prayers for situations or people that you think are beyond hope?

Our God is a comeback God.  When Jesus was on the cross, things looked bad.  When they buried Him, things looked a lot worse!  However... you know the end of that story.  The best comeback story of all time!

God has a comeback story that He's not finished with.  It's still being written and He's giving us a great honor and privilege to play a role.  Don't miss it.

"But God shows His love for us in that, while we were still sinners, Christ died for us"
Romans 5:8
Posted by Steve at 5:21 PM 1 comment: