VIDEO- The Most Beautiful

Enjoy this video from our good friend, Pastor Jacob Mouele, singing "Tu Es La Plus Belle" (You are the most beautiful).

Only 31 drums remain "sponsor-less".  Please join this effort before it's all said and done!  CLICK HERE to find out the whole deal.


Here is the new updates "Stack 'o Barrels", for all those keeping track:

Here is the video of the first time that N207FD took flight in over a year and a half!  Enjoy!

As of today, 28 fuel drum barrels have been sponsored in our Fueling Progress effort to fill a 20 foot shipping container with 78 drums!  Please consider getting in on this effort to kick-start our self-sustaining fuel program!  What's this all about?  CLICK HERE for all the details.


Want to keep tabs on how we are doing?  Below is a hi-tech graphic that we'll update in a timely manner so that we can see our progress.  You can see this graphic by hitting the "Fueling Progress Update" tab above. 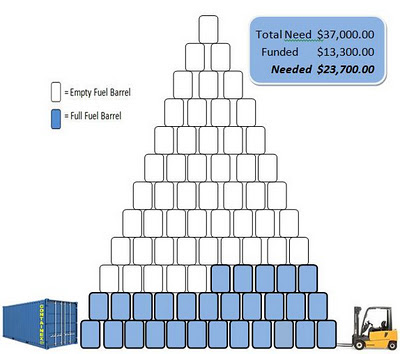 MMS Aviation started the work on our aircraft at the start of this past February.  In the past 9 months, a lot has been accomplished.  As I said before, I believe this is the best shape that our aircraft has been in since leaving the production line in 1982.  As we come to a close of the work here, I thought it would be good to review all that has been done.  Here is the work in summary:

Here is an exhaustive list of all that has been done:

No flights yet, but progress continues as we see N207FD in the best condition ever, since leaving the production line at Cessna Aircraft Company in 1982!  Enjoy the photos: