Here's the latest from Dale at MMS Aviation where they are restoring our aircraft for service: 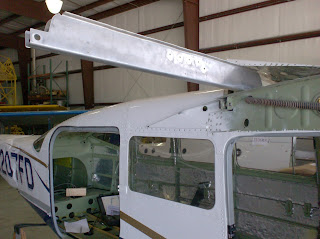 Today, we started putting in the rear spar carry through.  On further inspection, the one crack that we were able to see from the accident, was not the only crack in the piece.  Actually, there were 3 other cracks in the other 3 corners.  So, it is a good thing that we are changing it. 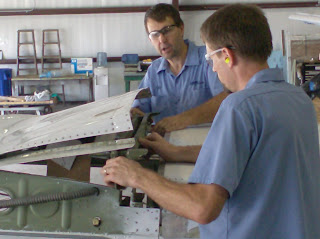 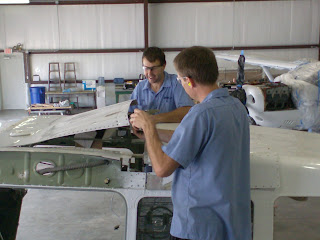 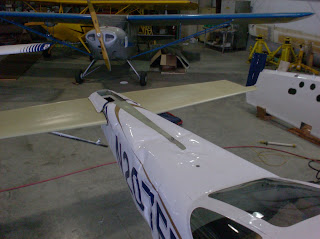 The Horizontal is finished, and only needs to be painted.  The right wing is sitting next to the aircraft and is all newly painted and awaiting installation. 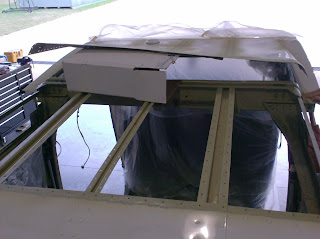 I did a test of the pitot static system this week and found that the encoder was leaking.  It is unrepairable, so I took the liberty to order a new ACK-A30 encoder. 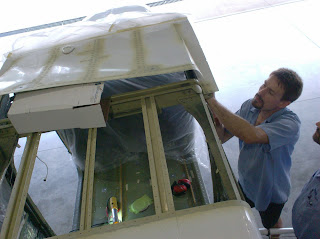 The avionics cooling fan came in yesterday, so we will start work on that next week along with the encoder.  I discovered a few cracks in the cabin fuselage formers down the left side, so we are repairing those.


The floor is 99% down, and we have 10 screws to install when we take the gear out one more time. 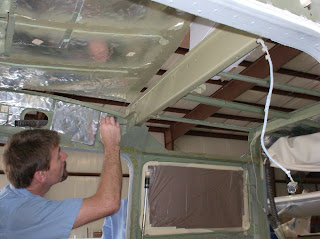 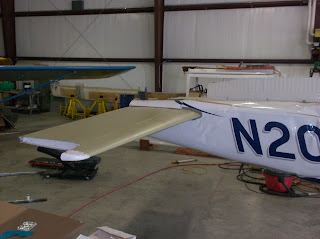 The right brake master cylinder attach has significant wear on it and I am changing it.  Not a very easy job, but the part was cheap enough....$70 or so.  The Tailcone will start to come off next week, and then while that is being repaired, we will start closing up the cabin, and instrument panel.  I am still waiting on the HF field approval.
Posted by Steve at 10:01 PM No comments:

Photos courtesy of my excellent passenger, GRAM!
Posted by Steve at 6:53 PM 1 comment:

For the Fourth, we decided that a road trip was in order.  So, it was off to the Bongolo Hospital with the fam and our 4 visitors- Alace's mom, Barbara, and our good friends Wendy and Nina with our newest good friend (and Nina's cousin), Sally.  We arrived on Sunday and will stay until Wednesday morning.

Here are some photos from today's fun:

Happy Fourth, everyone!  We are thankful to be US citizens for a while... but especially blessed to be able to be from a country where we can freely proclaim our ultimate citizenship in Heaven, joining the multitudes from every tongue, tribe, people, and nation around the throne in what will be the biggest worship event ever, for eternity!

pps.  The day before departing to Bongolo, the ladies participated in "Operation Guest House Beautification"!  Here's a link to those photos:   https://picasaweb.google.com/Gabon.Pilot/OperationGuestHouseBeautification#

Why We Do This

On our drive down to the Bongolo Hospital yesterday, we noticed many people and children in each village we passed were carrying water.  The fact is that, in many places around the world, people do not have the convenience of a water tap in their home.  You and I, however, can walk into multiple rooms of our house and manipulate a lever or knob and, voila, out comes water- hot, cold, or somewhere in between.

I mentioned to a friend in the car how much of a "game-changer" having water in your home is.  (One of our friends, here in Gabon, just got running water in their home).  So, I was asked what I meant by this.  I replied that when you don't have to wake up early, walk far, carry a heavy container of water to your home one or more times... when you don't have to do that and, instead, can have water service in your home, it makes a huge difference.  Think of the time saved.  Think of the energy saved.  Think about how much more alert and ready someone is when they have other things that they can focus their energy on?  More time for education.  More time for caring for others.  More time for gathering food.  More time to consider a new step in life. ...and energy to do it all.

Aviation is the same way.  Speaking of yesterday, in the time that I drove from Libreville to Bongolo, I could have done that same trip about 5 times or more in the Aviation Medicale de Bongolo aircraft!  What can be done in that time?  How much energy could be saved?  How many more lives can be touched and effected?

Ok- devil's advocate time... You say, "wait a minute, Steve.  What about the lives you could touch as you drive in the car?  The police?  The sandwich lady in Lamberene that we love?  The gas station attendant in Bifoun?  The people in the car?" etc.  Ok- you got me.  Those are valid points.  However, as God works in peoples' hearts and gives them a white-hot passion for a thing, they can often become discouraged by the things that happen around them, often including logistical things- mainly travel.  Here's a great example from a friend who is training local believers in linguistics in the east of Gabon- a place that, as you will read, is very difficult to reach...


"A message to let you know I am now safely in Libreville, having arrived earlier this morning around 1.30 AM very dirty and rather frayed at the edges after two very long and trying days on the road (33 hours in total) .

To try to put things in as small a nutshell as possible here's a short version of what happened those two days: We left Franceville around 6.15 am Sat. Almost 2 hours/170km into the journey suddenly the rear wheel on the driver's side of the truck came spinning off. How five wheels nuts can all give way in the space of five yards is a mystery to me, but that's what happened. To cut a very long story very short, it then took 9 1/2 hours to get the truck back into a reasonably safe condition to drive again. In the meantime someone had driven off with my car papers and being paper-less in Gabon is a far bigger problem than most of you can imagine.

So we were very relieved when by 7 pm we were sitting safely in the house of the pastor in Lastoursville (the nearest town to the incident) having also recovered my papers (thanks to the kind intervention of a local deputé (government official)). Mind you, I still had to go out and find a mechanic to get the truck back into a fully fit condition, so it wasn't till 9pm that we could really sit back. The pastor kindly put us up for the night at some inconvenience to himself and his family but unfortunately there was no mosquito net and plenty of mosquitoes so I didn't get much sleep. Since we had intended sleeping at Lopé (200km/4 hours further on than Lastoursville) we set off Sunday morning around 5.45 am knowing we had a long, hard day ahead but we had not imagined half of what it might entail. This included three flat tyres, including the third which happened before we been able to repair the second so had no serviceable spare wheel, having to replace three more wheel bolts (having replaced 11 the previous day, and two of the ones that became threaded on Sun. being ones that had only been put on on Sat!) and a broken battery to earth wire which meant all the electrics failed. I finally reached the mission guesthouse in Libreville around 1.30am this morning (Mon.), almost 20 hours after setting out.

Despite all the problems and challenges we are very grateful to God for many things, foremost among them that when the wheel came off no-one either in the truck or by the roadside (we were passing through a village at the time) was hurt in any way. It could have been a good deal worse. Secondly, for the kind intervention of the deputé to recover my papers when he was under no obligation to get involved. Thirdly, that I had people traveling with me this time to share the stresses and tensions - and to help change all those wheels! Fourthly, that I was able (with the help of a church member in Lastoursville) find a competent mechanic even though it was after dark on a Sat. night. Fifthly, that though it felt like we had to fight for almost every turn of the wheel to get here and the truck has suffered some damage and been expensive (thank the Lord I had just enough money to cover everything needed) we ourselves suffered nothing worse than being extremely dusty (it's the dry season) and rather frazzled."


There is a small airstrip in the village where our friend lives and a bigger airstrip near the first large town where she drove past.  From there to Libreville is a 2.4 hour flight to Libreville in the AMB aircraft.  Do you think swapping a harrowing 33 hour car drive for a 2.4 hour flight would impact our friends' work to equip local believers in linguistics?  Would aviation be a game changer for our friend?  There's no argument.  Yes.  Simply, "yes".  This is why we do this.  To come along the side of those that seek to be a blessing to others and conspire with them to express God's love.  To fan the flames of the passion God has burning in their heart to touch the world.  Game-changing flights that remove barriers so that these expressions can happen.  That's one reason why we do this.

Keep praying with us for the quick return of our aircraft from repairs in the US.  It's still looking like November for wrapping things up there, but... with prayer, we may see things move even quicker! 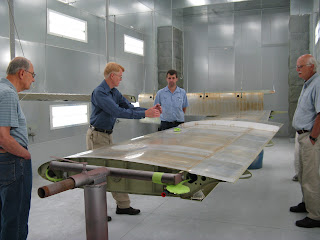 Here are more details and photos from the Bedford Community Church (Temperance, MI) that trekked to the MMS Aviation facility in Coshocton, OH to see how the repairs to N207FD were going.  I'll let Eunice, the group leader, share her thoughts here: 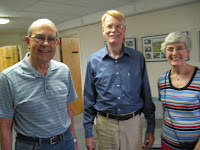 "Dwight Jarboe (MMS Aviation President) invested 2-1/2 hours showing us planes and explaining their ministry.  We were most impressed.  Keith Dodson helped us set things up and gave us a neat DVD with segments on your plane that were most interesting. 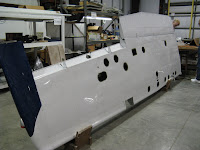 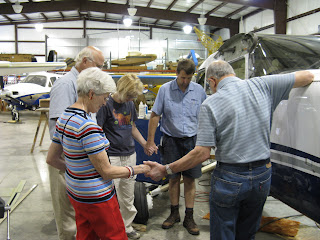 On your plane they explained they are rebuilding it from the front back.  It was great to know the engine and prop were not damaged.

The couple with us are Bill and Cheri.  He has been strongly burdened by the LORD to pray for your plane before you ever had it to use in Africa.  He was thrilled to pray in the circle photo with Dale.  He also prayed for Dale's health and family and for the future the LORD has planned for this plane to impact many lives for eternity.  Eunice"

We are so blessed to have supporters like Eunice, Bob, Bill, Cheri, and so many more of you that are joining us for the twists and turns of this exciting journey!  Thank  you for your prayers as we trek on.  Blessings, Steve and Alace

From Dale, our project leader at MMS Aviation:

"The front floor is in and the rear is going in.  The horizontal is about half way through the repair.  The paint has arrived and that means that as soon as we finish the Horizontal stab, we can get the wing, strut, door, gear fairings, flap, aileron and horizontal stab painted."