When a Care Package arrives!

Just wanted you all to share in the excitement that a care package generates for our family! 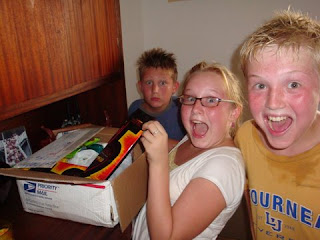 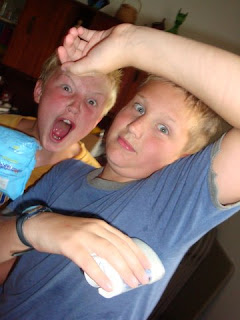 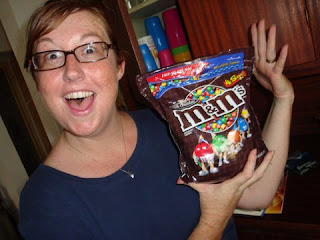 Thank you to those that send along your love and encouragement in this fashion. We have had good fortune with people sending out the US Postal service box for $54. It's one of those deals where you can put in as much as will fit.

If you're interested, here's a good address to use:

Airplane news: We are still working out all the details of the aircraft pre-purchase agreement. The seller wanted to change the language of some of it and we're trying to figure out how to handle that. We're in the driver's seat on the deal, so there's not much room for them to wiggle on this. There is a retired MAF mechanic in California able to do the inspection for us on May 5 and 6. By the way... just a day ago I got word that someone had given a one time donation of $10,000 for the airplane! WOW! Praise God.
Remodeling: The Solvigs were gone for a couple of weeks to check out job opportunities in West Africa. In that time, we had workers install the tiling. After their departure to the states, in a couple of weeks, we'll start the painting phase. So far, the tiling is a remarkable improvement. We are very happy.
SHIPPING CONTAINER: Yes! we received word that the container is here. It is in the port. That is step 1. Now begins a long process of getting it out of port. This is a mysterious process to me. I'm not really sure how it all happens, but it seems that you just keep talking to people that know other people that know other people. Then you give them a ridiculous amount of documents, in French and English, and then you negotiate a price. Then you wait a day or two, because you don't want to appear to eager to get your stuff- that would drive up the price. Then, you get a phone call and you're told to come get your stuff. It's bizarre. I'll let you know the moment that we get the stuff and what shape it's in.
HEAT: Speaking of ridiculous... it has been super hot the last couple of days. Usually you can count on some breezes here and there, but, NO! No breezes, just the glaring SUNSHINE!!! YIKES! To add insult to injury, the AC in our car broke and I was caught in a traffic jam to end all traffic jams at the airport today! Apparently, they are setting up roadblocks and pulling over people with the blue license plates to check if they are really certified as a government vehicle, which is what the blue plates indicate (ours is yellow). I was taking my German friend, Egmont, to the airport for his flight (his car is broken) and we got caught in it. It was all around the airport, so after he was on his way, I decided to walk around the airport to waste a little time so the traffic jam could clear up. And...
AT THE AIRPORT: So, I thought I'd make good use of my time by going to see our contact in the office of Civil Aviation. I wanted to see if he could supply me with a current list of airports in Gabon that are actually open. You see, every year the gov't inspectors must pay a visit to each airstrip and certify it as open. So, I am wondering which airports are actually open to use. However, my request is a big deal, apparently. No one has asked for this information since 2006 when the last report was made public. So, I got a photo copy of that report and word from the people in that office that I should know that some of the airports on the list are not open anymore. For some, the runway has washed away a little and needs fixed. For others, people have built homes on or too close to the airstrip. The people in the office could not say for sure which airports were like this, but that I should be careful. Well I guess so! HA!
"Un Grand Bouchon": This is the French term for traffic jam. It means "the big bottle cork". Leave it to the French to put things in terms of a bottle of wine. So, when I was done at the airport, the traffic jam was continuing as was the heat! I reluctantly climbed back into my car and pulled into the traffic. What should have taken 10 minutes to do (drive home), ended up taking about 45 minutes. I was sweating profusely and going through many kleenex to wipe away sweat rolling into my eyes. I tried to make the most of it and was listening to some Africa worship music on a radio station. The plus side of the heat and sun is that we can get some laundry done. We are so thankful that the water 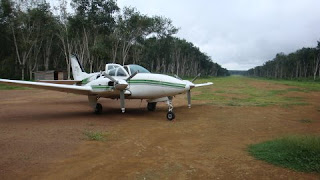 service has been on throughout the day for the last few days- and pumping very strong as well!
FLYING: I did an overnight trip in the Beechcraft Baron (pictured here) on Monday/Tuesday. It was one hour of flight on Monday, and overnight at a plantation, and then 2 hours on Tuesday with one stop before returning to Libreville. I'm thankful for the opportunity to fly and a couple extra bucks in my pocket. I think I would have gone crazy here, by now, without this.
So, that's an update for now.
Posted by Steve at 10:43 AM No comments:

The international press has not given much coverage to the public hospital (nurses) strike in Gabon. Here is a link to one such article.

Here are a couple of outtakes from the article...

"This strike has cost lives," said a resident from the capital Libreville who identified himself only as Charles. Citizens told IRIN they are reluctant to speak on the record about public policy for fear of reprisals by the authorities. Charles said his 42-year-old brother, who suffered high blood pressure, died shortly after being turned away from the main public hospital, Centre Hospitalier de Libreville (CHL)."

"I hope this strike will end soon," said 31-year-old Myriam, who is pregnant. She said she was recently turned away for a scheduled prenatal consultation at CHL. "I am asking myself whether I am going to have my baby in that hospital. But what else can I do, given that I do not have the means to go to a private clinic?"
Posted by Steve at 11:27 AM No comments: 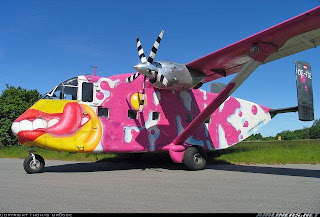