In light of Virginia Tech... trying not to have a knee jerk reaction, but, are we breeding killers in North America? You have to search for a long time 'til you find a home that has a video game system without a shooting game (not targets, but shooting people). You won't find an arcade without a game where people are targets.

Just a thought. I'm off the soap box now.

If the world were a symphony, trying to get it's act together to worship the Creator, how would you describe the pieces of the symphony?

We're getting the band back together!

So... Jake and Elwood Blue (the Blues Brothers) go to church where James Brown is the preacher, and Jake (Jim Belushi) has a vision- the vision is to get the band back together. Ah yes... and then comes the rest of what is arguably the best movie ever, with the best car chase ever on film.

So... here's a stretch, but, when our Creator brought Adam and Eve on the scene, wasn't the original intent to "get the band together" and establish worship to our Lord? Ok, we agree. Now, here's the jump: When God established the covenant with Abram (essentially saying, "I'm gonna bless you so that you bless others"), wasn't HE saying (in a way), "we're getting the band back together"?

So... Here are a couple of things that have happened while on the road, telling people about why we're taking the show (the family) on the road (to France and onto Africa):

>We ate "dandelion salad"... yep... real dandelion. If you eat it with mashed potatoes, it's really not that bad.

>We caught up with friends of ours whose marriage, the last time we saw them, was in bad and getting worse. Believe it or not, we caught up with them by accident, at a church where people were giving testimony to what God was doing in their life. What had God done? Shown the world HIS amazing ability to resurrect a failed marriage by bringing them back together, stronger than ever! Very cool.

> We've seen our kids (who've been skeptical about making visits to other churches) make new friends and most always say, after every visit, "I had a really good time! I'm glad we came." That's very cool, as a parent.

Seriously... Who wants to write a book with me?

Ok, folks. I've asked before and I'll ask again: Who would like to make a few dollars with me on the side and write a book? I'm simply looking for someone willing to reveal to the world their shortcomings and embarrassing moments where they probably should have been fired from their jobs! We'll combine them, along with the lessons we've learned, into one funny and inspiring book (at least, that's what it'll say on the back cover).

Here are a couple of mine:

1) The "Anna" incident: As a youth pastor in TX, I hit "play" on the VCR (for those of you who remember what that is) at the back of the church and then went to sit with my wife, Alace. However, in the darkness of the room, I had accidentally slid into the wrong aisle and was sitting next to, and had my arm around and pulling close, a teenager! Where was Alace? Sitting in the aisle behind, yucking it up with the rest of the youth group.

2) The "Rachael" incident: As a youth pastor in PA, I was a director of several retreats where I had to show up early and stay late. At one such retreat, I was wrapping things up and getting on the road. Hoping to see where our church's youth group was as well as say affectionate things to my wife (one of our groups leaders), I decided to give her a call on her cell phone. Upon hearing "hello" at the other end, I thought it'd be cute to ask her "Hey honey... what are you wearing?", to which I heard a startled voice yell- "STEPHEN STRAW- THIS IS RACHAEL!!!" What followed was a mix of anger, confusion, and dismay. Alace picked up the phone, while watching Rachaels' face get redder and redder and said... "Honey- what did you just say?" ...needless to say, I had some 'splainin' to do.

3) The "Heather" incident: Long story short (Heather's last name is Storey, so... pardon the pun), Heather was in the church van and about to sit down on a bag full of sandwiches. What did I do? Well, it's logical... stop Heather from sitting down, which, from my location, at the van side door, meant lunging inside and pushing on her backside to stop her. Hmmm... youth pastor pushing on a teenage girls' butt. Not good. By the way- a teenage boy simultaneously acted to stop this at the same time. What did he do? Grab the bag of sandwiches! Now... why didn't I think of that!?!

4) The "Blue Chair" incident: Summary- I had the youth group split up into about 10 groups of 7-8 and do a spray-painting project in the church gym. Problem? The unforeseen problem of poor ventilation in the gym. Suddenly, we had a lot of "happy" teens. Church was never so fun! ...by the way... I apologize for the global warming problem that also resulted from this night back in the year 2000.

5) The "Big Red" incident: Summary- Our church's van was nicknamed "Big Red". One evening before youth group, I took our student intern, Big Dan (that's funny... "Big Dan" in "Big Red"....) out for a taco at Taco Bell. I got antsy in the line at the drive thru. We decided to go inside, so I threw 'er in reverse. Problem? I didn't see the small sports car that had pulled very close to the back of the van and the sound of a crumpling soda can was the next thing I heard. Bummer.

Have You Dug Your Grave? 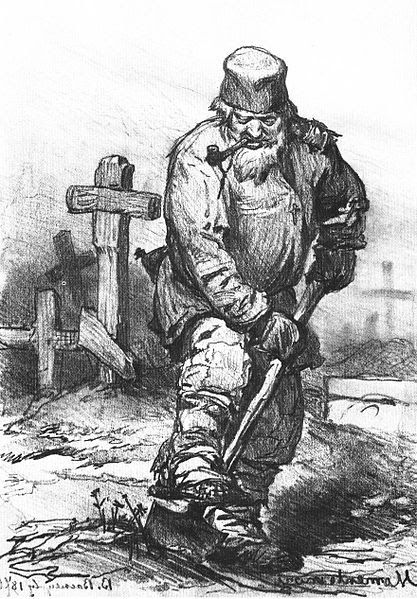 If we, as Jesus-followers, are, ourselves, dead and alive only in Christ, I'm wondering if we've dug our graves yet?

I like the scene in Band of Brothers where Sgt. Spears tells another soldier, Lt. Blithe, that the reason he cowers in a foxhole in the heat of the battle is that he thinks that he's still alive... that he has any chance of getting out of the war alive. In other words, if he'd start functioning with the thought that he's already a dead man with nothing to lose, he'd start having some success. Hmm.

So, if we'd just get our fears out of the way by "digging our grave" and burrying ourself (only through the grace of God), we'd start taking some chances for the Lord. We'd start "living life outside of the boat".
Posted by Steve at 2:03 PM No comments:

You're not going to believe this!

I was sitting at my desk with the TV on a sports station behind me. I noticed that, in the next segment, the DC area sports station was going to have a segment with Ben Olsen and the viewers should email their questions into the station. So.... you can guess the rest.

In the next segment, they got to the end of the interview with Big, Bad, Ben and they said, "well Ben, we asked our viewers to post their questions and we have time for one. It's from STEVE from your home state of PA. He'd like to know, 'what's getting the most play on your IPOD?'"

YESSSS!!!! I (indirectly) asked Ben Olsen what he's listening to on his IPOD!!! Can you believe it?

Oh yeah.... Ben's been listening to Cold War Kids.. I had just been checking them out that day as well.

I'm serious... me and Ben have a connection. It's eerie.